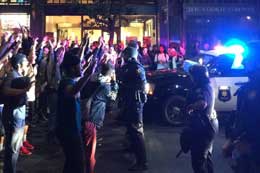 Two young men were arrested in Berkeley Police Department's jurisdiction, and there were no reported injuries related to the demonstration. California Highway Patrol and Oakland Police Department provided units of mutual aid as protesters marched through Berkeley streets. Just before midnight, authorities declared the rally an unlawful assembly and ordered a crowd of about 50 people on Telegraph Avenue and Bancroft Way to disperse.

Protesters in Berkeley, many of whom were UC Berkeley students, chanted "hands up, don't shoot" and "no justice, no peace — fuck the police." Crowds marched north on Telegraph Avenue and through Downtown Berkeley before the dispersal order was announced on the edge of campus.

According to a police alert sent to community members, Berkeley police officers were notified at 8:49 p.m. by Oakland authorities that a "large group involved in a violent demonstration" was making its way to Berkeley.

Protesters damaged property on Telegraph Avenue near Woolsey Street in South Berkeley, police said. They also allegedly set fire to a trash can near Telegraph Avenue and Haste Street, which authorities quickly extinguished.

On Friday, Ferguson's police chief Thomas Jackson identified the officer who shot and killed Brown as Darren Wilson, a 28-year-old white officer and six-year veteran of the police force, according to the Associated Press. Authorities also released evidence implicating the victim in a convenience store robbery the day he died, angering those who say the release of robbery details rather than further information on the shooting was intended as a distraction.

By accepting you will be accessing a service provided by a third-party external to https://belvederepoa.com/